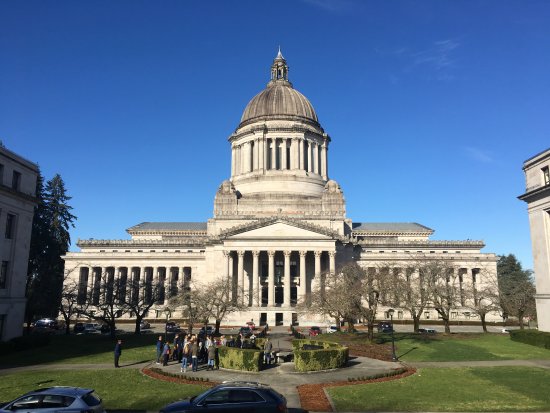 The Capitol Building in Olympia is a four-story rectangular building that houses the main executive and legislative branches of the government of the State of Washington. The Capitol, also known as the Legislative Building even though it also houses some of the Executive Branch, is but one of many buildings and ornamental features of the Capitol Campus.

There are many trees and flowers, and even a dedicated school bus parking area, on the Campus.
The first floor (ground floor) of the Capitol has a large meeting room, a Deli, a gift shop and a Visitor Center. The next floor up is really the main floor with the offices of the Governor, Lieutenant Governor, Treasurer, and Secretary of State having offices in the four corners of the floor. The middle-of-the-floor Rotunda has an inlaid bronze version of the state seal that is now roped off to prevent further erosion to the face of George Washington, particularly his protruding nose.

The third and fourth floors are the primary legislative floors with the Senate and House Chambers on opposites of the building on floor three, and the chamber galleries on the fourth floor.

One of the most striking features of the Capitol is its dome, the tallest self-supporting masonry dome in the U.S., and the fifth tallest in the world. The other four, in order from tallest down, are in Vatican City, London, Mumbai, and Florence. The architects’ original plan for the 26,000-ton dome was for it to support itself by having gravity hold it in place to where it sat. It was a good plan, but several earthquakes later there was some movement and damage, causing fears of a potential total collapse if there was further seismic activity. Work was done in 2004 to permanently attach the dome to the rest of the main building.

In the second-floor Rotunda are bronze lamps and fire pots made by the Tiffany Company. These lamps and fire pots comprise the largest collection of Tiffany bronze in the world. The main chandelier weighs over 10,000 pounds and is over twenty-five feet in height. In addition to its 202 lights, it contains human figures and life-size faces in its large motif. Though not from Tiffany, the Capitol also has a large brass bust of George Washington, now with a shiny nose. There seems to be this idea all over the world where people think it is good luck to rub a metallic protrusion, such as nose or toe, as in the case of one of the popes in St. Peter’s at the Vatican.

Troy Lambert and Stuart Gustafson are the authors of the Capital City Murders series of novelettes. Visit the capitalcitymurders.com website for more information about the series, individual books, ordering information, etc. You may contact the authors by clicking here.

Troy is a freelance writer, author, and blogger who lives, works, and plays in Boise, Idaho with the love of his life and three very talented dogs.

Passionate about writing dark psychological thrillers, he is an avid cyclist, skier, hiker, all-around outdoorsman, and a terrible beginning golfer.